Our attention to service and quality has made us an industry leader. At our company, the customer always comes first, and we constantly strive to exceed your expectations.

Want to know more about our business and the services we offer? Use our website to get detailed information about us and meet our dedicated staff members. We're looking forward to working with you. 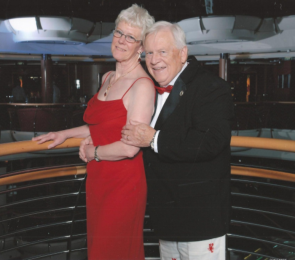 Mr. Holmes grew up in the mountains of Maine in the most westerly town in the state- Fryeburg- known for fairs and farming, not oceans and ships. For many years he and his father before him owned and operated Camp Ettowah in Fryeburg. Andy devoted the first 35 years of his working life to educating young people- principally as the Headmaster of four well known East Coast Private Schools.

During his “school” years he also got bitten by the travel bug and in 1965 he founded Saco Valley Travel in Fryeburg and North Conway, NH as an investment/hobby. After Saco Valley came Academy Travel then Harbor Travel in Boothbay Harbor and since ‘99, Worldwide Cruise Headquarters. Along life’s voyage he became smitten by the sea as well and this led to a U S Coast Guard Ships Masters’ license (more important than his PhD) and an almost fixated love of the cruise industry. He is now an Elite Cruise Counselor as trained and accredited by the Cruise Lines International Association. He is also President of Maine ASTA – American Society of Travel Agents.

Andy and his wife Louise, who is also a licensed Ships Captain (and an ACC - Accredited Cruise Counselor), have sailed on over 150 modern cruise voyages in the last twenty-five years and they have done walk-on visits of another 35 ships. They were honored to be on the Maiden Voyage of the Holland America vessel AMSTERDAM and similarly on the NOORDAM when she docked in Boston after her delivery voyage from construction in Europe. They sailed aboard the inaugural voyages of the Royal Caribbean FREEDOM of the SEAS, LIBERTY of the SEAS, OASIS of the SEAS and in December of 2010 the ALLURE of the SEAS and Celebrity SOLSTICE. The Holmes’ were recently named Godparents of the Diamond Lounge on Enchantment of the Seas and have reached Pinnacle Status in the RCCL C&A Society. Mr. & Mrs. Holmes are also specialists in European River Cruises and in cruises for folks with special needs.

The Holmes’ strongly feel that knowledge of product is vital for responsible service to their clients and they continue classes and product-specific training. Their recent cruises have included 8 Transatlantic passages, a Mediterranean transit, Europe, Hawaii, Alaska, and  three fabulous river  cruises ... Practice makes perfect---you can’t sell unless you believe!

Personal knowledge and experience is the qualification that clients trust the most in seeking advice on selecting their cruising experiences. Andy and Louise and the rest of the WWCH team are probably the best qualified cruise counselors in the State of Maine and they delight in sharing their experiences with you.

In the old time tradition of travel agency operation, there is never a charge for their cruise industry services!

- Your symbol of honesty and quality -