Looking for a competent, experienced and friendly partner for advice and assistance when you're planning your vacation? Someone who guarantees you'll have a great time? Welcome to Worldwide Cruise Headquarters, the experts in global travel! 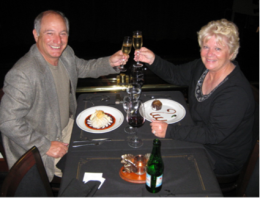 John & Donna Argonti were both born and raised in Pittsburgh, PA.  After their marriage they set off for John’s Air Force career as a pilot resulting in multiple moves around the US  and overseas while Donna worked as a physical therapist,  When John finished his Air Force career, he moved on to United Parcel Service as a pilot in DC8, 757, and 767 aircraft.

They began cruising in 1989 and have continued with more trips each year until retirement in 2001 when they had more time to cruise.  John and Donna along with their cruising “Buddies” Phil and Charlene Budd met Andy & Louise Holmes on a cruise in 2003, were impressed with their business, and decided to join Andy and Louise’s team.  They continue to cruise frequently while sharing their love of the industry as Accredited Cruise Counselors.  They plan to continue their adventure of new ships, new destinations, and new friends while encouraging others to join in the fun and excitement of cruising.