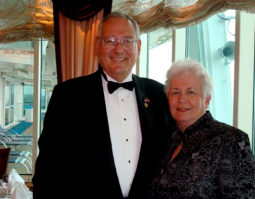 Phil and Charlene began their travels of the World courtesy of the United States Air Force, Charlene as a Flight Nurse and Phil as a Transport Pilot.  After retiring from the service in 1984, Phil continued his World Travels as a Captain on Boeing 727, 757, 767, 747 and DC-8’s with United Parcel Service Airlines.  Phil retired again in June 2009 from the B-747.  Phil and Charlene own a farm in the hills of middle Tennessee where they have raised feeder pigs and beef cattle over the last 25 years.

Phil along with his co-worker John Argonti, met Andy and Louise Holmes aboard Royal Caribbean’s Grandeur of the Seas, in January 2003 while transiting the Panama Canal.  Avid cruisers they both were looking for a way to enjoy it more and to share their enjoyment with others.  During this cruise and meeting with the Holmes’, Phil and Charlene took on yet another venture.  The Mid-South Office opened in March 2003 under the umbrella of Worldwide Cruise Headquarters.  Phil and Charlene are both ACC qualified and have enjoyed the cruising lifestyle to its fullest