Looking for a competent, experienced and friendly partner for advice and assistance when you're planning your vacation? Someone who guarantees you'll have a great time? Welcome to Worldwide Cruise Headquarters- FL, the experts in global travel! 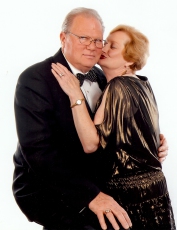 Ed Norris is a retired Air Force Aircraft Maintenance Supervisor, and in his second life, he retired from the FBI as a Logistics Manager.

When he was in the service he “visited” Vietnam and did his R&R in Australia.  Additionally, he was stationed at and visited many Air Force Bases throughout the United States and Puerto Rico.

Kathy Norris is retired from her own medical transcription business.

Growing up, her stepfather was a wholesale food salesman and she has lived all over the East Coast.  She says she has “gypsy feet,” having gone to 14 different schools through her 12 years of education.  Additionally, she lived in Germany for 2 years, which allowed her to travel extensively in Europe.

Kathy and Ed have been cruising since 1989 when they took their first cruise on their honeymoon.  After that they were hooked and have gone on over 50 cruises on ships in the fleets of Royal Caribbean, Princess, Costa, Norwegian, Holland America, Celebrity, Carnival and Avalon.  This gives them the expertise you will need when choosing a cruise line and itinerary that will best suit your travel preferences.

Their cruise itineraries have included the Eastern, Western and Southern Caribbean, Alaska, Bermuda. Hawaii, Panama Canal, New England and Canada, the Rhine River from Basel to Amsterdam, Mexico, and the Galapagos Islands.

Ed is an expert on Royal Caribbean, is a Crystal Cruise Specialist, and an Avalon Water Specialist; in addition to being a specialist with all-inclusive resorts such as Sandals and Apple Vacations.